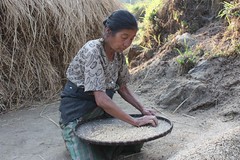 Biocultural heritage is a complex system of interdependent parts centred on the relationship between Indigenous Peoples and their natural environment. Its components include biological resources, from the genetic to the landscape level; and long standing traditions, practices and knowledge for adaptation to environmental change and sustainable use of biodiversity.

Biocultural heritage is held collectively, sustains local economies and is transmitted from one generation to the next. It includes thousands of traditional crop and livestock varieties, medicinal plants, wild foods and wild crop relatives. These precious resources have been conserved, domesticated and improved by communities over generations — and sometimes millennia.

We all rely on biocultural heritage for food and health security, particularly in the face of climate change risk and uncertainty. For some 370 million indigenous people who depend directly on natural resources and are vulnerable to climate change, this heritage is vital for survival. It is also closely linked to their cultural identity and religious beliefs.

Indigenous Biocultural Heritage in the Andes 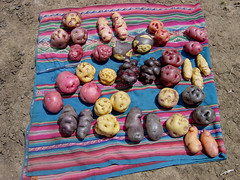 Peru: Different potato varieties in the Potato Park
The six Quechua communities of the Potato Park, in Cusco, Peru, hold about 1500 varieties of cultivated potatoes (eg. with frost or drought resistance). And the area also has the world’s highest number of wild potatoes. The communities’ traditional knowledge, customary laws and spiritual beliefs that nurture these resources are in turn shaped and sustained by the Andean ancestral landscapes and their sacred mountain gods or Apus.

Farmers hold much more of our genetic resources than agricultural researchers do, and farming in varying environments helps enhance genetic diversity.