UN Declaration on the Rights of Indigenous Peoples 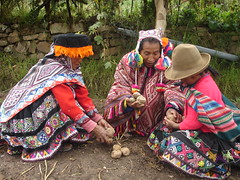 After several years of negotiation, including active participation by indigenous peoples, the UN General Assembly adopted the Declaration on the Rights of Indigenous People in September 2007. The Declaration protects indigenous peoples’ rights to their collective biocultural heritage as a whole, including traditional knowledge and resources, territories, and cultural and spiritual values and customary laws.

Although it is not legally binding, 146 countries have adopted the Declaration and so have committed to respecting it. In Peru, for example, when a Declaration is accepted by Congress it becomes a set of standards and principles that need to be applied. If indigenous peoples use the UN Declaration to implement specific provisions in their local governance systems, national governments that have signed up to the Declaration have a duty to respect these provisions.

The UNDRIP contains a number of provisions that communities can use to strengthen their rights and biocultural heritage: