COP15 should protect mountain landscapes, and the Indigenous Peoples and local communities governing them 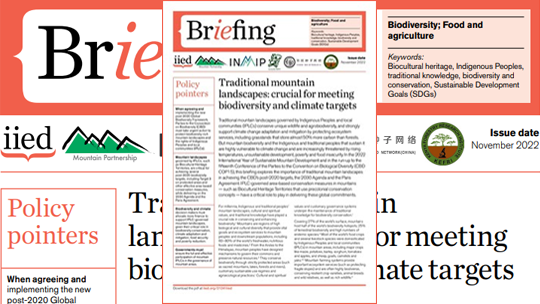 Press release, 23 November 2022
The new global biodiversity framework (GBF) due to be agreed at negotiations known as COP15 in Montreal in December, and aimed at halting and reversing the loss of nature, needs to protect biodiversity-rich mountain landscapes and the Indigenous People and local communities that govern them, according to a new publication from IIED.
Calls at the just-concluded COP27 climate negotiations for more climate finance to be allocated to Indigenous Peoples and local communities went unheeded despite the crucial role they play in tackling climate change, from preserving grasslands and forests that can deliver large-scale emissions reductions to protecting watersheds that provide water to millions of people.
The biodiversity negotiations in Canada, coming hot on the heels of the climate summit in Egypt, offer an unprecedented opportunity to strengthen joint action on these interconnected crises.
Traditional mountain landscapes: crucial for meeting biodiversity and climate targets lays out how decision-makers at COP15 need to make sure that there is more finance for mountain landscapes governed by Indigenous People and local communities and that legislation is introduced to protect these areas and the rights to the land and resources.
Krystyna Swiderska, a principal researcher at IIED, said: “Earth’s rich biodiversity – its plants, animals, bacteria and fungi – is under threat with many species already extinct and yet we depend on biodiversity for everything; from absorbing carbon dioxide from our atmosphere, to providing clean air and water, to growing food and producing medicines.
“Our best chance of reversing the loss of nature depends upon putting the rights, needs, interests, cultural values and knowledge of Indigenous Peoples and local communities at the heart of global plans.”
Alejandro Argumedo, coordinator of the International Network of Mountain Indigenous Peoples (INMIP), an Indigenous Peoples’ organisation working to protect biological and cultural diversity, said: “Indigenous Peoples and local communities know best how to co-exist with nature – we have been doing it for thousands of years. Climate change and nature loss are urgent crises that threaten everyone. It’s imperative that Indigenous Peoples and local communities should be given decision-making power, finance and secure land rights needed to respond."
For millennia, Indigenous and traditional peoples’ cultural and spiritual values and traditional knowledge have played a crucial role in conserving and enhancing biodiversity in mountain landscapes. Covering 27% of the world’s surface, mountains provide up to 80% of the world’s freshwater and host half the world’s biodiversity hotspots. They also provide nutritious foods and medicines and resilient crop varieties and livestock breeds for climate adaptation.
Although the UN Convention on Biological Diversity already recognises the vital importance of mountain biodiversity and the value of traditional and sustainable land-use practices of Indigenous and local communities in preserving it, mountain regions are highly vulnerable to climate change; temperatures are rising above the global average and glaciers are melting.
The altitudes at which some species can exist are narrowing, endangering unique highland biodiversity, such as the Bengal tiger, snow leopard, mountain gorilla and vital food sources such as ancestral potato varieties in the Andes. Mountain biodiversity and the livelihoods of some of the world’s poorest people are also facing growing pressures from unsustainable development and mining.
Establishing collectively governed biocultural heritage territories (BCHTs) can strengthen protection for the land and resource rights of mountain Indigenous Peoples and local communities, revitalise interlinked biodiversity and culture, strengthen livelihoods and in turn improve resilience to climate change. BCHTs are biodiversity-rich landscapes rooted in traditional territorial concepts that assert the land rights of traditional societies. They provide ethical alternatives to state-run protected areas which often exclude and criminalise communities.
Successful examples include Peru’s Potato Park. Since 2000, it has conserved Andean wildlife and ecosystems effectively across 9,200 hectares by focusing on Indigenous cosmovision, customary laws, agrobiodiversity, food, land rights and self-determination. It has successfully enhanced food security and nutrition by tripling native crop diversity and has doubled incomes of Quechua communities.
The Potato Park model is now being adapted to different contexts. For example, a biocultural heritage territory is being established in Rabai, Kenya where ten Mijikenda villages have joined forces to conserve and restore their sacred Kaya forest landscape of 20,000 hectares, including endangered endemic golden-rumped elephant shrew, trees and butterflies, and resilient cowpeas, millets, sorghum, cassava and maize, wild coffee and Indigenous vegetables.

For more information or to request an interview, contact Sarah Grainger: +44 7503 643332 or sarah.grainger@iied.org

END_OF_DOCUMENT_TOKEN_TO_BE_REPLACED

As part of IIED's series looking at how the people and organisations working with the institute are successfully creating change, Asociación ANDES, a Peruvian NGO that combines local-level support for Andean potato farming communities with international action on protecting Indigenous Peoples and biodiversity, is profiled.
Indigenous food systems, biocultural heritage and agricultural resilience

IIED is working with partners in the UK, China, India and Kenya to establish a new partnership and network for interdisciplinary research on Indigenous food systems.