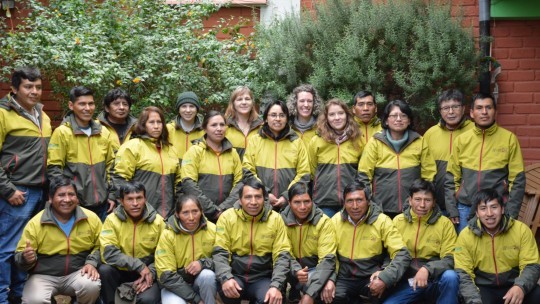 ANDES is dedicated to defending Indigenous Peoples' rights to locally-controlled food systems, genetic resources and development that aligns with their values.

It works at both local and global levels, giving it valuable insights into how to deliver and scale up rights-based approaches to vital issues such as food security and effective in situ conservation of crop genetic resources for climate adaptation.

ANDES is perhaps best known for helping to establish the Potato Park, a vast community-managed protected territory in Peru's Andean mountains. This fragile high-altitude ecosystem is a world hotspot for potato biodiversity and home to some 6,000 Indigenous Quechua people. 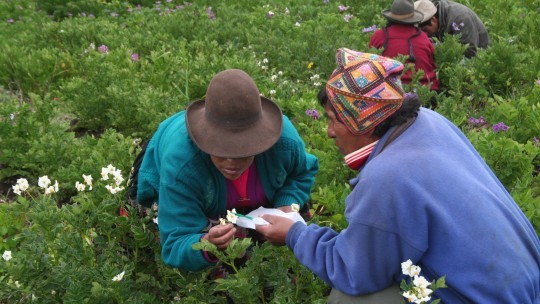 The Quechua and their Inca ancestors have cultivated potatoes in the area for thousands of years. Their traditional way of life is based on a spiritual worldview, which includes a deep respect for the Earth's bounty and the need to live in a balanced, harmonious relationship with nature.

Quechua communities see themselves as living in a reciprocal relationship with each other, the land and sacred spirits – all of which need to be in balance to achieve wellbeing ('Sumaq Causay').

In the 1990s, the Quechua, like many Indigenous communities in South America, found their traditional way of life increasingly threatened by wider economic forces.

Peru's government introduced economic liberalisation and encouraged investment by international agricultural and mining corporations; many of these sought to evict Indigenous Peoples from their lands and destroy local ecosystems and biodiversity – and even introduce patents on indigenous plants.

It was to protect Indigenous Peoples and the local ecosystem that brothers Alejandro and Cesar Argumedo registered the Association for Nature and Development Sustainable (ANDES) in Cusco in 1995.

The two brothers, from an Indigenous Quechua family, worked with local communities to develop responses to these threats: they set up the Parque de la Papa, an Indigenous Biocultural Heritage Territory that is collectively governed by six communities based on customary laws and protects the area's interlinked biodiversity and cultural – 'biocultural' – heritage.

The Potato Park was a radical innovation: the new legal framework for landscape governance reaffirms the role of Quechua societies in managing their Indigenous biocultural heritage and their authority to conserve traditional culture, knowledge and livelihoods, which sustain one of the world’s richest genetic reserves.

The farmers use the diversity of potatoes and their ancestral knowledge of their different properties to adapt planting strategies to changing weather patterns, experimenting with developing strains that are more resilient to climate change.

Community members have also established environmentally-responsible collective micro-enterprises that are based on solidarity economy principles, reflect their cultural values and are led mainly by women. These include ecotourism, crafts, and processing and selling natural plant-based products such as herbal teas, shampoos and medicinal creams.

How our allies and collaborators create change

As part of IIED’s 50th birthday celebrations, the organisation is showcasing some of the many organisations we are working with around the world on issues ranging from climate resilience to energy access.

ANDES' work is effective and sustainable largely because of its focus on supporting community leadership, training local Indigenous experts and developing innovative decolonising and participatory approaches to programme planning and implementation. This approach has enabled the Potato Park to become largely self-sustaining.

From local to global

The Potato Park and its many innovations have become a model for similar projects in Peru and around the world. It provides one of the few effective examples of long-term conservation of genetic resources by communities in the field, where evolution and co-evolution can support climate adaptation.

ANDES is heavily involved in facilitating community-to-community learning exchanges to scale out the Potato Park and its many innovations. Indigenous communities are often based in mountainous regions and other risk-prone environments that are already experiencing changes in temperature and rainfall patterns as a result of climate change. In addition, Indigenous communities often have limited access to markets, infrastructure or financial or government support systems.

The peer-to-peer exchanges can have a great impact on these communities, connecting them with wider networks and giving them the confidence and tools to value and promote their traditional knowledge and worldviews – which are often ignored by governments and global processes.

ANDES established the International Network of Mountain Indigenous Peoples (INMIP) (with IIED support) and has coordinated the network since 2014. INMIP links some 50 mountain communities in 11 countries from Kenya to Kyrgyzstan as they work to establish biocultural heritage territories and protect centres of crop diversity.

The network organises exchanges on how mountain communities can respond to threats such as the erosion of natural and cultural diversity, resource exploitation and climate change.

In the run-up to the COP26 UN climate summit, INMIP issued a declaration on the rights of Mountain Indigenous Peoples to food sovereignty and biocultural heritage and called on governments to protect Indigenous food systems as a key response to the climate crisis.

During COVID-19, ANDES pioneered live-streaming technology to enable presentations by Indigenous communities direct from their landscapes; this was used at an event organised by ANDES, INMIP and IIED at COP26, linking communities to COP26 participants and to each other to showcase their vast knowledge for building resilient agri-food systems.

ANDES sees biodiversity as a critical pathway to greater food security and better nutrition and lobbies for a rights-based approach to seed governance from local to global levels.

Around the world, Indigenous communities maintain informal 'seed banks' to store and share seeds of diverse, resilient crops. These traditional seed systems are guided by core values of community sharing and reciprocity, which in turn helps to sustain a rich diversity of plant species and varieties, both cultivated and wild.

Such seed collections are set to become increasingly important for food security as climate change advances. It is vital for communities to maintain crop diversity in situ to enable adaptation to climate change, and in 2004, ANDES spearheaded the repatriation of 450 varieties of native potatoes from the International Potato Centre back to the Park – the first agreement of this kind.

ANDES has also worked with the Potato Park to mobilise Andean communities to successfully influence Cusco’s regional government to introduce new laws banning GMOs and biopiracy. The regional ordinance against GMOs was replicated in many other regions of the country and contributed to a broader movement leading to a national-level moratorium on GMOs.

ANDES' focus on the holistic protection of Indigenous knowledge, worldviews and rights and decolonising action-research provides a global model for effective management and conservation of biological and cultural resources, from crops to wildlife and ecosystem services.

ANDES and IIED have worked together for 25 years. IIED has established a workstream on biocultural heritage, working closely with ANDES and partners in Kenya, India and China, to undertake research on the role of biocultural heritage and Indigenous food systems in biodiversity conservation, climate resilience and food security, scale-out community-governed biocultural heritage territories to Africa and Asia, and inform and influence policymakers at national and international level.

ANDES have been a close partner of IIED for over 20 years. They have a vision that is both values-driven and very practical – because they want to change things.

They do very innovative work, from establishing the Potato Park to brokering the first-ever crop repatriation agreement between Indigenous communities and a gene bank and have been instrumental in shaping the biocultural heritage concept.